We scouted wheat fields and found brown wheat mites. However, it’s not in all the fields; it’s very sporadic.

Today was an interesting day as it started as a sunny, beautiful day. Mother Nature put a twist on things and teased us with what seemed like, a promising break in the clouds. Jared and I were in Omega spraying foliar nutrient test plots when the sky opened, spit on us and abruptly left. We got a few neat pictures in the process though. After finishing the plots, we scouted wheat fields and found brown wheat mites. However, it’s not in all the fields; it’s very sporadic. Some fields we found have a higher pressure in bird cherry oat aphids and others, a higher pressure in wheat mites. We encourage you to be out checking your fields for these critters. 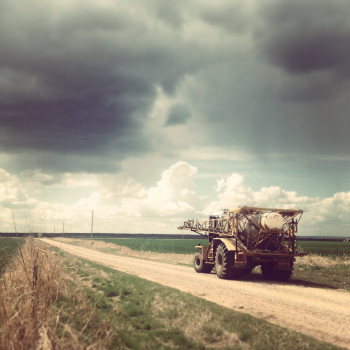 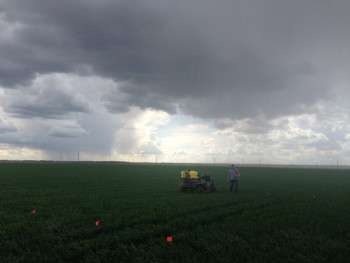 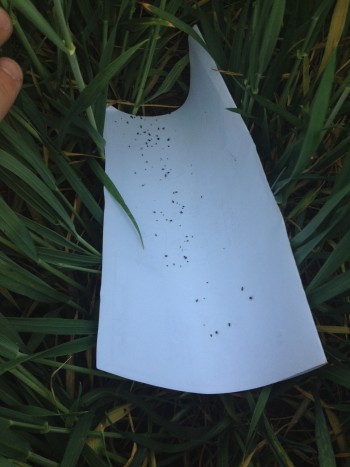 We had a successful field day at the Winfield/CHS Answer Plot on Wednesday. The turn-out was great as we had about 25 farmers attend and followed up with a great lunch at Sniders. We had several knowledgeable speakers from our agronomy team here at Plains Partners as well as speakers with Winfield Solutions. Our goal was for our farmers to take home the solution behind the plant data and put that data toward their operation to maximize their yields and profit.

Some of the main focal points we concentrated on were the differences in wheat varieties when using low and high rates of nitrogen with Ascend (growth regulator) and no Ascend. We also looked at our seed treatment (Warden Cereals), which is an insecticide/fungicide that provides early season protection of seedlings against injury by insects and diseases.

In the Warden Cereals plot, we added Ascend, Zinc and also a micronutrient package. As we added each chemical to the plant, it was obvious how much more the plant had enhanced from the untreated check.

In the canola, we discussed the different varieties in the plot. We compared the differences in low and high rates of nitrogen which also determined the winter hardiness of the plant. We found that by using a higher rate of Nitrogen, more plants survived the winter which in turn, will give you a higher yield.

We also looked at the seed population in canola ranging from 200,000-600,000 seeds which would be 2-6 pounds/acre depending on variety.

At this time, we need to be scouting for aphids and other insects. We are excited about a new foliar insecticide with extended residual used for aphids coming out called Transform. If you are interested in this product, please contact the agronomy department. 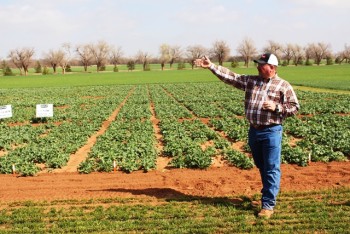 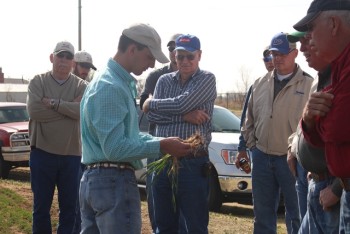 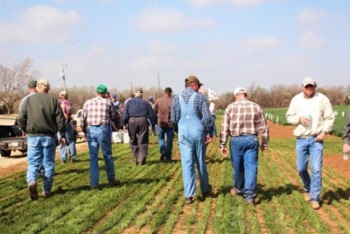 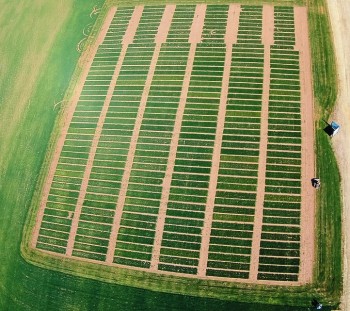 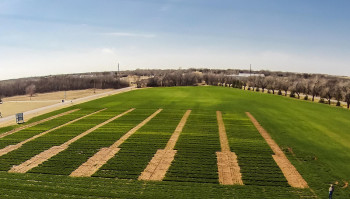 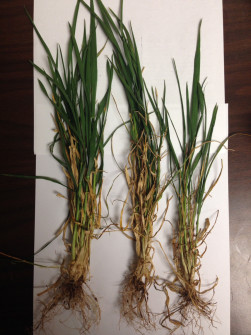 This picture of Clearfield variety AP503 wheat shows the growth difference with the different trials used. The first plant is with Warden Cereals and Ascend. The second plant is Warden Cereals only. The third plant is an untreated check.